I'm actually having fabulous weekend at my craft desk. Having said that, about six hours yesterday was cleaning and organizing and I have a few more hours to go today.  I actually like to organize - so much so that I'm a little thrilled when things get out of control so I can re-organize!!  Sad, huh?  But I also always re-discover things that I meant to use. In this case, I came upon a Ziploc of dies that I could not put away until they were used, but the entire bag had slipped under a stack of finished cards so I totally forgot them.  As fate would have it, one of the dies were stacked teacups - and the Merry Monday challenge this week includes a photo with stacked teacups! 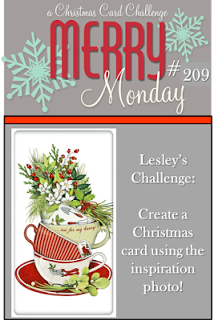 I added some greenery and some flowers with yellow centers for this "warm & wonderful" greeting. 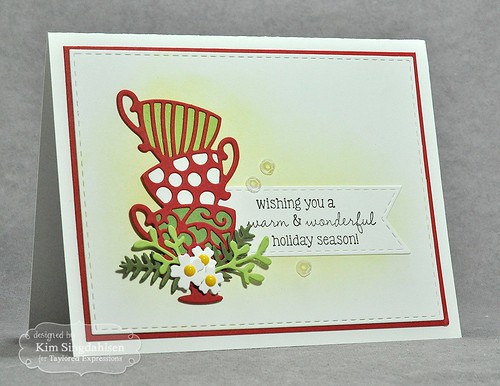 I may have gotten a little carried away with the yellowed background but my new toy this week are the Clarity Stencil Brushes that are all the buzz right now.  A few of my blogging friends got them and raved over their ability to do soft backgrounds.  Until recently I only saw them at overseas shops. About a week ago, I saw them pop up in the new section at Simon Says but fairly pricey at $25.  They are also at artistsupplysource.com for $10 less but are backordered.  So I stuck them on my Simon Says wishlist and signed up for email notifications at artistsupplysource and figured I'd wait a bit.  Less than 12 hours later, Jennifer McGuire came out with her video on Clarity Stencil brushes - I can't tell you how fast I bought them out of my Simon Says wishlist because once she does a video on a product - good luck finding it!!  But I got them!! And you can see my first ever soft background!!

(Just a small detail - I got the flowers and greenery adhered to the cups and something was out of balance. The base of the teacup was actually covered by the flowers so the cups appeared to have nothing to sit on.  I just cut another piece out of the bottom of the die and adhered a second base slightly lower.  Problem solved!)

InLinkz.com
Posted by Kim S at 6:00 AM Labels: christmascard, tayloredexpressions
Email ThisBlogThis!Share to TwitterShare to FacebookShare to Pinterest