The current challenge at Addicted to CAS immediately caught my eye then I waited until the last minute to actually do it.  The challenge is "stitched". 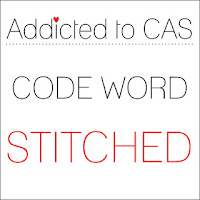 It immediately caught my eye because I have had a variety of "stitched" line dies in my not-yet-used stash.  They are meant to be single stitched lines but I wanted to use them as a full border before I cut them apart.  This set is from My Favorite Things. 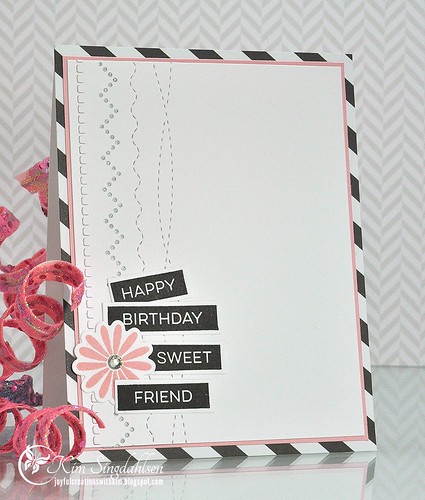 I didn't want to cover up the stitching so I pulled out the label maker set of stamps and one small flower.

There is a bit of glitter silver paper behind the stitching.

InLinkz.com
9 comments (add your comment here)
Posted by Kim S at 10:35 AM Labels: birthdaycard
Email ThisBlogThis!Share to TwitterShare to FacebookShare to Pinterest

My oldest is a freshman in college and he's doing quite well - except that right at the moment, he's sick.  And he's sick without me around to take care of him!  I laugh but at the same time, I know that's when the reality of being on their own really hits these kids who are trying so hard to be adults.

I wanted to get a card out to him right away.  Even though I can't be there, I'm still thinking of him! As I paged through my stash of "get well" supplies, I realized I have very little appropriate for a a guy.  I did run across this set by Taylored Expressions called Souper Soon which I realized was perfect.  I actually sent him off to college with a stash of Campbell's Chicken and Stars singles - the kind that you microwave and drink right out of the can.  Since he was young, that's what he's wanted when he was sick!

I then realized that it all worked perfectly with the current Share Joy Challenge as I could put the can and the sentiment on the small panel. 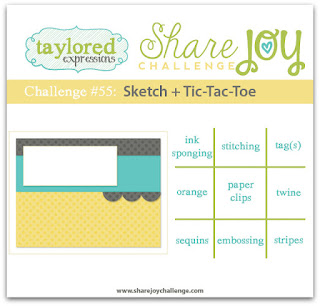 I followed the sketch.  I also tried to play tic-tac-toe.  I got the stripes and the twine.  I had a cute little tag with a heart that I was planning to use - but you might see the problem in that sentence - "cute" would not work for my 6'5", 200 lb+ guy. 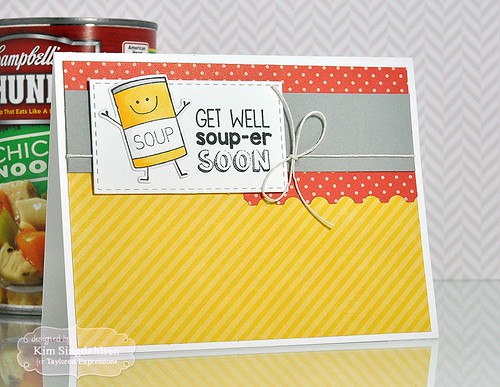 I'm guessing he'll be feeling better before he gets this. (I wish I had the healthcare that they have on college campuses - he good some good medicine!)  But I can still picture him smiling and rolling his eyes!


InLinkz.com
2 comments (add your comment here)
Posted by Kim S at 6:00 AM Labels: getwellcard, tayloredexpressions
Email ThisBlogThis!Share to TwitterShare to FacebookShare to Pinterest

It's time for a new sketch at Freshly Made Sketches! Today we have a sketch by Jennifer Timko. 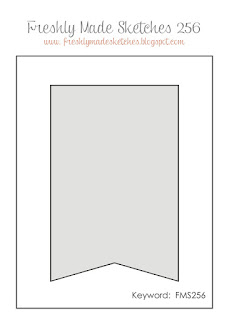 I saw that big panel and decided to use a big leaf that I just purchased.  It didn't quite fit - so I stamped it on a full size white panel, cut out the leaf, then cut out the banner.  I put a couple of layers of black cardstock behind the leaf to lift it a bit and give it a small shadow.  (For the shadow effect, I'd like to have lifted it more, but then I would have had to deal with the sentiment that was half lifted too!) 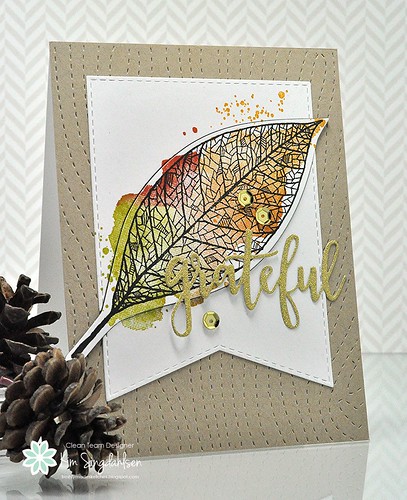 I hope to see you playing along this week.  That big open space is wide open for your creativity!!

The glitter paper is my favorite from Michaels.  The sequins are cheapies probably from Michaels (There are so many wonderfully, elegant gold sequins out there - for this card I wanted brassy and shiny!)

The Paper Players: So Very Blessed

I love creating groupings of dies - and I had a not-yet-used die on my desk that has mini pumpkins, gourds and acorns - AND then to totally make my week, The Paper Players came out with this challenge. 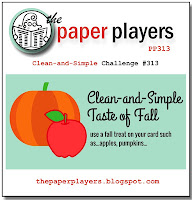 It was meant to be! 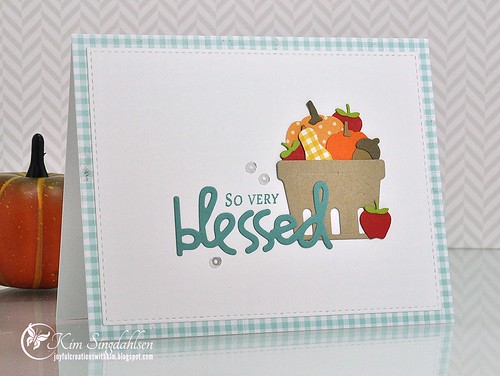 I created a little basket of fall fruit using a variety of dies from Taylored Expressions.  I wanted a simple die-cut sentiment to put across the top so found this "blessed" die from Paper Smooches. I added a "so very" from a Papertrey set.  The PTI set actually has a blessed die too but it was a little too ornate for my simple little fruit basket.

I do send Thanksgiving cards - not quite as many as I send for Christmas - but it's a day of gratitude and I love sharing that with others.  Thanks to The Paper Players for giving me some motivation and inspiration to create this card!!

3 comments (add your comment here)
Posted by Kim S at 6:00 AM Labels: autumncard
Email ThisBlogThis!Share to TwitterShare to FacebookShare to Pinterest

It's time for a new sketch at Freshly Made Sketches! Today we have a sketch by Amy. 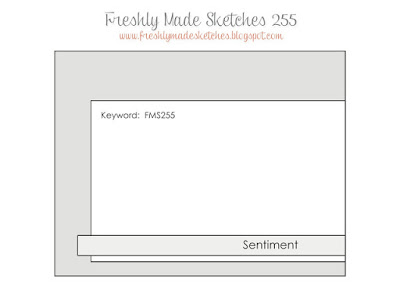 I was ecstatic when I saw this sketch.  Next week is my brother and sister-in-law's anniversary.  I recently purchased the Rose Garden Thinlits by Stampin' Up with them in mind.  They were married in a small stone church in the mountains on a crisp and clear September morning with brilliantly colored fall foliage as their flowers.  I kept the background of the card gray and brick for the church. (I'd have used a stone folder if I had it - but it's the look that counts, right?!)  I played around with colors on the center panel but stuck with white because I love the look of grays and whites with fall colors to mimic autumn frost.  I added a few sequins for the same reason. 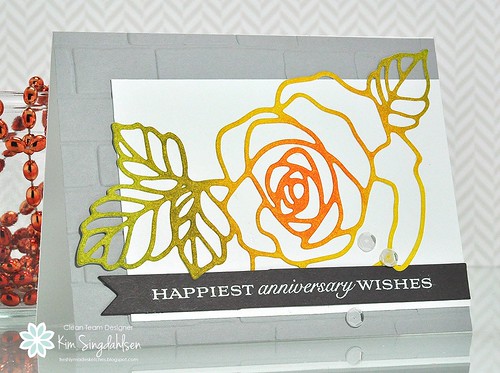 I put the die on a piece of watercolor paper and penciled around it so I could differentiate the leaves and the flower..  Then I sponged distress ink before I cut it out.

The banner and sentiment is from Papertrey Ink - I was thrilled that I had a long anniversary sentiment to fit on the long banner on the sketch.  I did have to stretch the Papertrey banner die slightly by cutting in from one side, moving it to make it longer, then cutting in from the other side.

I hope to see you playing along this week.  There is so much open space to let your creativity loose - LOVE these kind of sketches!

ETA: I forgot to add the brick embossing folder from Stampin' Up!


InLinkz.com
11 comments (add your comment here)
Posted by Kim S at 6:26 AM Labels: freshlymadesketches, lovecard
Email ThisBlogThis!Share to TwitterShare to FacebookShare to Pinterest

It's been so much harder to keep up with friends since I've started working full-time.  We used to be able grab coffee, or lunch, or happy hour - or a walk - or volunteer together at church - anything just to keep up with each other.  Now it's a much more conscious effort.  I wasn't positive I'd be able to find time in both of our schedules get together for one of my dear friend's birthday - so I made sure I had a card done and in the mail.  It needed to be bright and cheerful, more cute than elegant, not over the top girly but still feminine. Here's what I came up with. 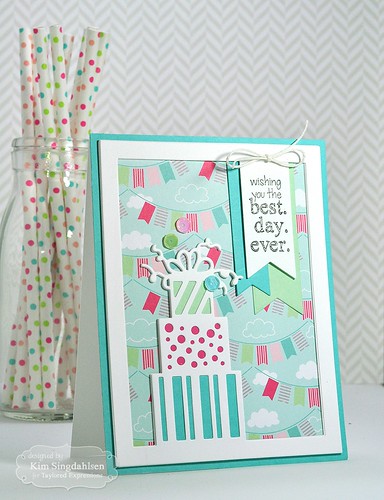 I am a huge fan of that sentiment. It definitely fulfilled the "cheerful" part of my card.  Check!  I thought the banner paper was "cute" without being "cutesy".  Check!!  I liked the splashes of pink but it didn't get too girly particularly since I focused on blues and greens in the cardstock.  Check!!!

The presents are from a Taylored Expressions die that is really handy for quick and easy birthday cards.  It cuts the presents and the frame.  Then there are dies to cut the colored paper for behind the presents.  I added a bit more with the trio of banners and the patterned paper - but it's a fabulous card if you just put a sentiment in the open space. 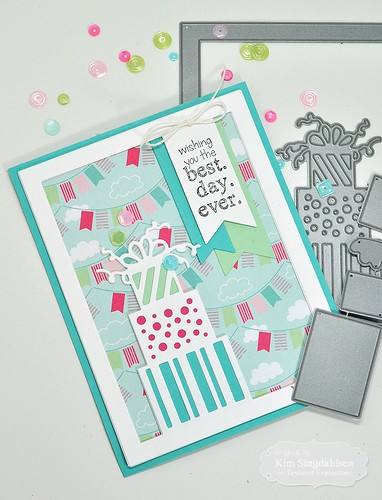 
InLinkz.com
4 comments (add your comment here)
Posted by Kim S at 6:00 AM Labels: birthdaycard, tayloredexpressions
Email ThisBlogThis!Share to TwitterShare to FacebookShare to Pinterest