I am not a summer person.  I don't do heat.  I don't like bugs.  I hate the noise of fans running non-stop in my house.  My favorite day of the year is the first fall day that it is cool enough to turn off the fans and there is peace.

In fairness, there are a few things that I like.  I love hiking in our Colorado mountains.  I love sitting on the deck as the sun goes down.  And I really, really love fresh-squeezed lemonade! 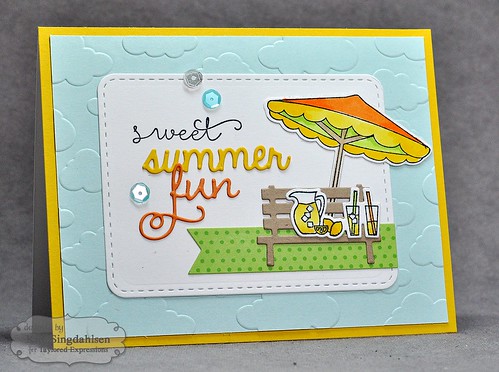 I have started collecting the monthly script dies from Taylored Expressions.  I started with June which includes the words sun fun, dad, summer, June, vacation.  They aren't overtly for cardmaking, but I have so many typical dies like birthday, get well, etc. - I love adding to my collection with more unique words so I can do different sayings.

To use my June set for the first time, I knew I had to use "fun" because I love the "f", but since I think it's clear that "summer" and "fun" don't go together for me - I dug around and found the "sweet" stamp - which then obviously led me to the lemonade!! 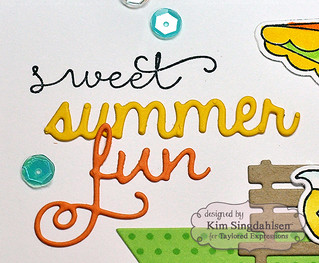 I did have fun coloring in the lemonade and made sure I added a touch of sparkle to those wonderful, cold ice cubes! 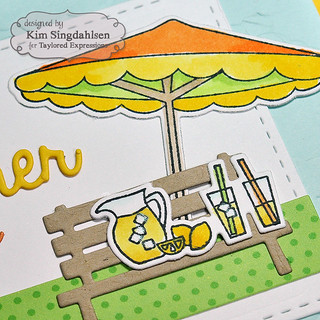 Now I'm going to head out for a walk (since it's 6 a.m. and only 62 degrees)!  And then, I'm going to squeeze some lemons, add some fresh mint and a pinch of nutmeg - and I'm ready to face the day!

13 comments (add your comment here)
Posted by Kim S at 5:56 AM Labels: tayloredexpressions
Email ThisBlogThis!Share to TwitterShare to FacebookShare to Pinterest

Freshly Made Sketches: So Kind Butterfly

It's time for a new sketch at Freshly Made Sketches! Today we have a sketch by Jen Mitchell. 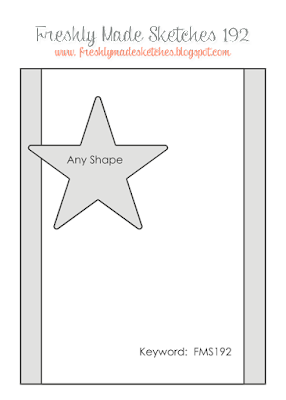 In my first Stampin' Up new catalog order, I got the entire array of butterfly stamps and dies - so it was an obvious choice to plop a butterfly on my card!  Plus - my new favorite color is Stampin' Up Watermelon Wonder so that was clearly meant to be the butterfly. 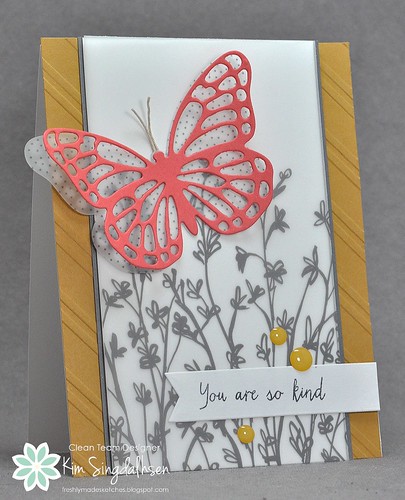 After those choices, the card evolved.  I originally had a black and white patterned paper along the edges with a white panel and large sentiment.  It was pretty good, but as I was dealing with a large tower of paper that kept tumbling over on my craft desk, toward the bottom I spotted an unused pad of vellum that Stampin' Up offered for Sale-a-bration this year.  I thought it would be good to add a backing to the butterfly, but then I saw the pattern with the cute little flower stems along the bottom and this card was born!  (Maybe I need to keep my desk out-of-control messy so that I have other happy accidents!?)

Be sure to check out what the other designers have done on the FMS blog and also browse more of Jen's work at her blog, I Create.  Then I hope to see you play along!

The vellum is the Stampin' Up Sheer Perfection Designer Vellum Stack which, sadly, was only available for Sale-a-Bration.

In last month's newsletter from Taylored Expressions, the design team created cards for Father's Day along with photos and a brief shout-out to our fathers.  Although my father died when I was quite young, I still have vivid memories.  Here's my dad in the 1970s. 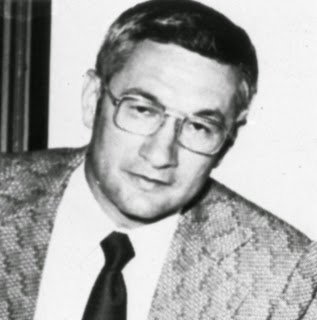 This picture was downloaded from the South Dakota Sports Hall of Fame website with this little blurb.

1949 McLaughlin HS grad. 1953 Huron College grad. He coached Huron High's basketball team to an unbeaten season in 1958. He became a coach at Rapid City Central in 1962. In 1969, he became Rapid City Stevens' first activities director, a position he held until his death in 1977 at age 45. In eight seasons as basketball coach at Huron and Rapid City, his teams were 195-62. At Huron, he was an NAIA Little All-American in football in 1952, and he also was a standout in basketball. He was inducted into the NAIA Hall of Fame in 1966.

Obviously, athletics were an important part of his life.  The story goes that he was drafted by the NFL  in the 60s but decided he could make more money as a teacher!!

At the time of his death, he was the high school principal at Stevens High School in Rapid City, South Dakota.  In his honor, the town renamed the gym after him. This is my son in front of his grandfather's gym. 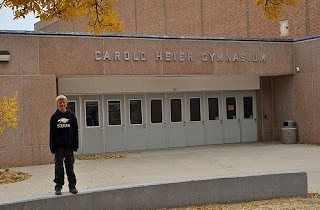 I have scrapbooks of letters from people honoring and remembering him.  Some came decades after his death, with people just wanting to let us know what a profound impact he had had on their lives. He was a sincere and very caring man and had an impact on all who knew him.

My memories are of small moments - yet they are vivid memories.  We spent a lot of time out in the Black Hills of South Dakota - long hikes and camping.  I have raised my children in the same way.  I remember his booming laugh.  He had an amazing ability to laugh at himself.  I remember one time we were hiking with my grandmother and we got to a stream that was a little too big to jump across.  My dad found an old log and struggled for a long time to drag it to the stream.  He propped it up and let it go to fall across to give us a footbridge, but when it dropped the entire log shattered.  He sat down on the ground and laughed until he cried.

His love of the outdoors is why when Taylored Expressions wanted to do a tribute to our fathers, I went right for the stunning Birch Tree dies.  Although there wasn't a deer looking at us as my father sat and laughed at himself, the feel of this card represents my memories - beautiful, peaceful, and a little misty. 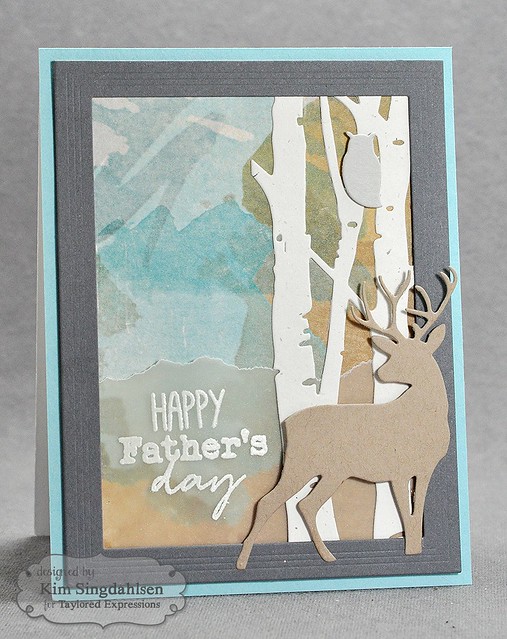 I love you Dad!

The patterned paper is from the We R Memory Keepers Free Spirit 12x12 paper pad.  I found a section that looked like a distant mountain scene! As I was writing this, you could find this paper at places like Createforless and there were even a few pads available on Amazon.  The birch trees are done in a confetti white cardstock but I don't remember what brand it is.

InLinkz.com
8 comments (add your comment here)
Posted by Kim S at 6:00 AM Labels: fathersdaycard, tayloredexpressions
Email ThisBlogThis!Share to TwitterShare to FacebookShare to Pinterest

Taylored Expressions maintains a fabulous array of Pinterest Boards sorted by product and some by theme.  It's a fabulous source of inspiration and the Baker's Dozen design team is tasked with showing you how we were inspired by a card.  I was still in need of Father's Day cards and was inspired by Jen's card found here. 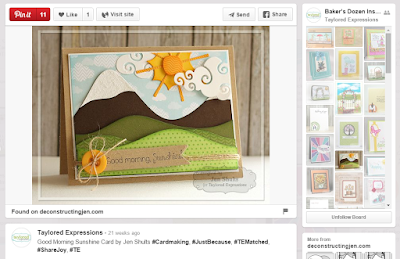 The layers and dimension are amazing!  I had a difficult time not simply copying the card!!  I ended up creating a strip that included a layered and dimensional scene.  I made it a little more masculine by adding a fishing pole and some fish (although I will take some grief from my husband about fishing for goldfish!) 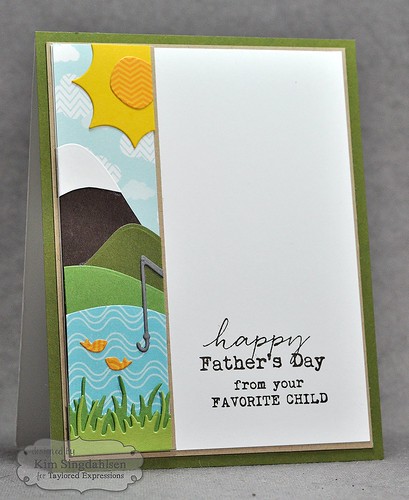 The fishing pole is actually cut off of the fishing boat die.  (I am feeling quite proud of myself for that small bit of creativity!) 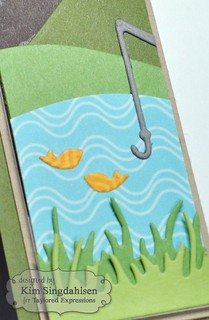 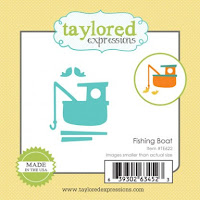 Be sure to check out Jen's blog, Deconstructing Jen, for all of her amazing inspiration (and a great sketch challenge!)

InLinkz.com
6 comments (add your comment here)
Posted by Kim S at 6:00 AM Labels: fathersdaycard, tayloredexpressions
Email ThisBlogThis!Share to TwitterShare to FacebookShare to Pinterest