Freshly Made Sketches: A Button Note

It's time for a new sketch at Freshly Made Sketches! Today we have a sketch by Judy and here’s what I did with it! 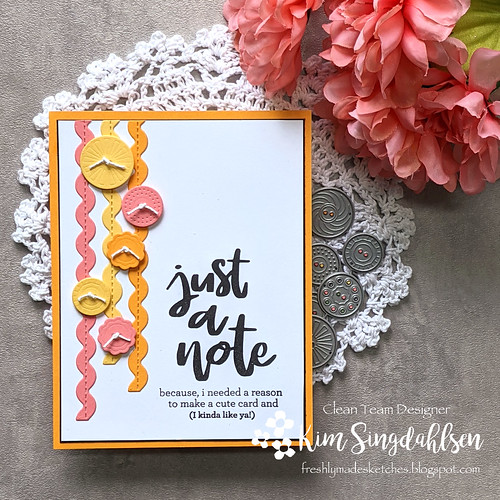 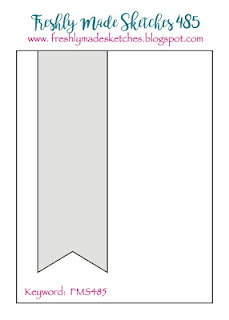 Besides the sketch, my idea for this card came from cleaning out a large container of supplies that I kept because I might need them someday.  But they definitely haven't been used since my move to the new house around three years ago - and probably years before that.  One of the small containers was a box that I thought had a couple of punches - but it appears it was a button box.  It had punches and dies and some of the old Sizzlit Embosslits - all buttons.

When the church card ministry was at its peak - real buttons were in style on cards and we used them a lot.  But people were complaining about the difficulty of mailing them. So I made an effort to get rid of some of the bulk with diecut buttons. Interestingly, it wasn't long after that before buttons became less of a thing - probably for the same reason - just too darn hard to mail! My stash disappeared into a box only to be found again in the last few weeks! 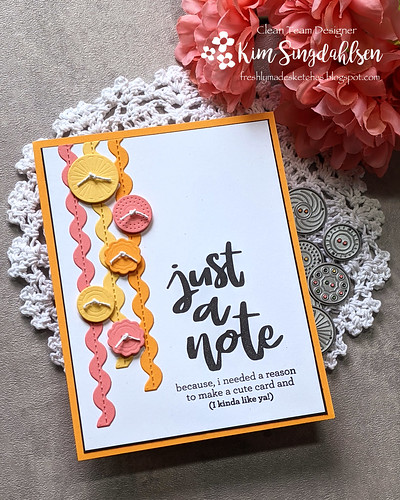 Obviously buttons - or even circles - weren't on the sketch, but I had a ric rac die which I could use to create a banner shape and it tied into the button theme beautifully. The sentiment was chosen mainly because it was the "shape" I was looking for, although I think the sentiment is charming.  (I'm more picky about my sentiments than about anything else on my card - the saying, font, style, shape, etc. - all have to be just right.)
I hope to see you playing along with us this week at Freshly Made Sketches!

Posted by Kim S at 6:00 AM Labels: freshlymadesketches, justanotecard
Email ThisBlogThis!Share to TwitterShare to FacebookShare to Pinterest