It's day 2 of sneak peeks for the October release from Taylored Expressions!!  There's a quite a variety today.  Wait until you see the Roly Polys!  There are four fabulously fun dies - I'll show you the penguin.  On a different note, I also have an elegant winter scene to show you.

Be sure to check all of the other designers starting on the Taylored Expressions blog because there is just too much for one designer to show off in just a few days.
All the products that I have used are linked at the bottom, but remember that new products aren't live until Thursday, October 1, 7 a.m. PST.


You are going to love the Roly Polys!!  There are four sets: a penguin, a snowman, Rudolph and Santa.  Check out out how cute they are!! 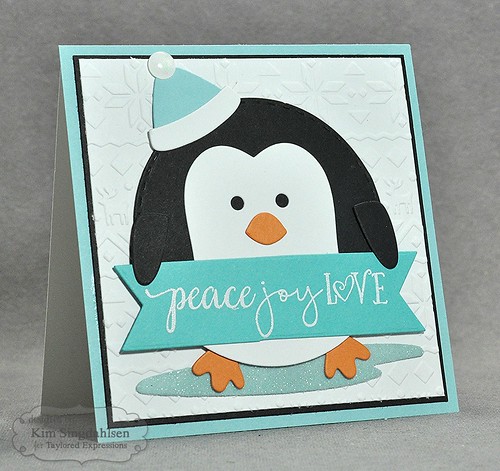 The dies that come with each Roly Poly work with the Stitched Circle Stacklet. I used my Roly Poly Penguin on a card but I can easily see him as a tag.  The banner was my addition, but you could use his belly to add a "to/from" from the new set Special Delivery (I probably also should have made a tag to show you this set!)

I embossed the background with the new Nordic Holiday Embossing Folder. He's standing on the "pond" from Build a Scene - Central Park (more of this on the next card.)

The sentiment is from In & Out Christmas!! These In & Out sets are so handy to have because you don't have to worry about matching the sentiments on the front and on the inside!  I decorated the inside with the new Little Bits - Penguin die.  My family saw this card and immediately laughed about how much weight the Roly Poly Penguin loses when the scene pulls back and you see him from afar on the inside!!!  (This is much better than their usual "too much bling" comment when they even look at what I am doing!!) 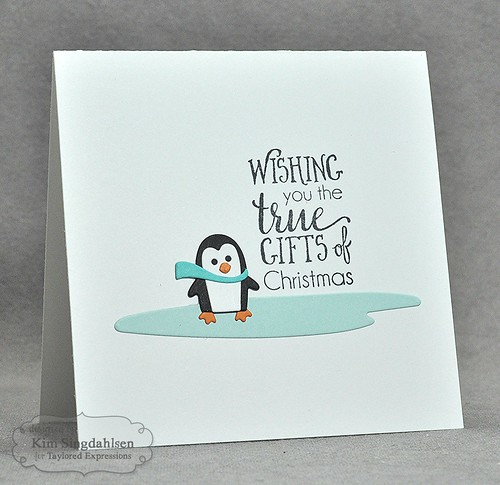 And now from cute to elegant. I was looking at the Season's Greetings Banner Die and realized that just like with so much of this release, it could easily be bright and cheerful or it could be elegant. I decided to give it a little frost and pair with with the Build a Scene - Central Park die which includes a wide variety of elements to build a scene. That sweet little deer is worth the entire set!  Not to mention that I have used the pond as a pond here, but also as grounding for my roly poly penguin on the first card. 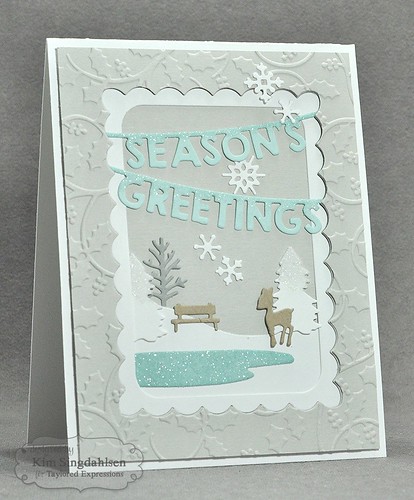 I framed the scene with the previously released Frame in Frame Cutting Plate but I moved backwards so that the bottom layer is topped with the scalloped frame which is then topped with a piece of light gray that has the scalloped frame removed. I embossed the panel with the new Holly Embossing Folder.  Of course, I had to add a few snowflakes from Little Bits - Snowflake Confetti. 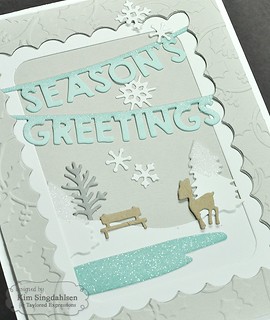 Be sure to head over to the Taylored Expressions blog to see what the other designers are doing with these products, and be sure to leave a comment for a chance to win!

Links to new products will not work until the release on October 1st.


InLinkz.com
Posted by Kim S at 8:00 AM Labels: christmascard, tayloredexpressions
Email ThisBlogThis!Share to TwitterShare to FacebookShare to Pinterest