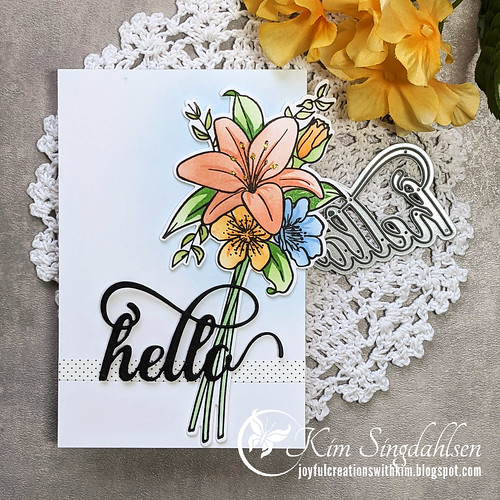 I've been talking about my giant basket of supplies all of which I needed to make decisions about.  They are things other cardmakers had recommended and I immediately purchased - but do I really need them (or multiple choices of a product) since I still haven't used them.

Today, I played with repositionable stencil adhesives.  The classic is Pixie Spray but someone had recommended Krylon Easy-Tack which does have the advantage of being in the local craft stores. 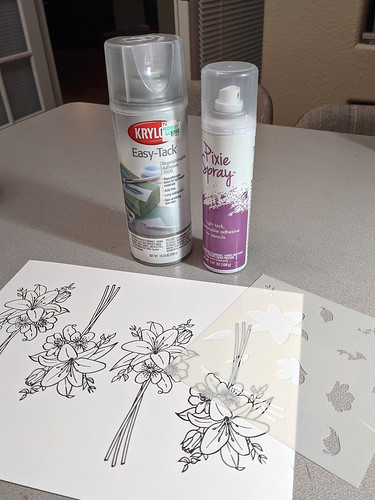 I used them both to add color to the four flowers.  Honestly...six of one - half dozen of the other.  The Krylon is perhaps slightly stickier - just a bit harder to peel up. I was initially worried it would peel up paper or other ink - but the stickiness didn't cause any problems. That's not to say that the less-sticky Pixie Spray was a problem.  In fact, I did three of those flowers - each requiring repositioning the stencil 13 times to get the various leaves and flowers- and the Pixie Spray stayed sticky the whole time.

So no choice between the two but what I did learn - repositionable adhesive is totally worth it.  I can't believe I waited this long to use it. I haven't been using stencils often so I just stuck them down with a piece of repositionable tape along an edge or two but that meant the center part wouldn't be firmly down.  I think I would have been using stencils a LOT more if I had gone with the spray adhesive to start with.  Every single edge is so nicely adhered, it makes brushing on color just a dream.

I LOVE the clean results using the stencil fully adhered. 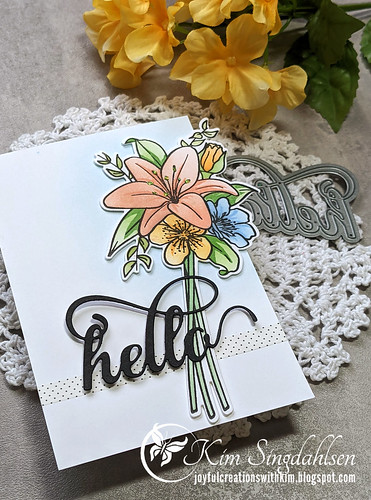 I trimmed the card down about 5/8".  It's a really tall flower so I angled it slightly and then wanted it over the edge yet sill a standard size. I initially didn't get this flower because of its unique size and shape - then I saw one of my favorite ever cardmakers do some creative things with it - check out Laurie Willison's fabulous samples!

BTW - I was also experimenting with some Altenew mini-cubes that I recently purchased.  A few weeks ago, I did a card with their Rainbow Prism set  (out of that same basket of untried products!) which I liked but lamented that I hadn't picked the right starter set and what I really needed were the some of the packs with colors in the same family to allow for easy layering. Now I have some of those and that's what I'm playing with today.  Here are two of my color combinations (details in the supply list).  I have a "celebrate" die coming from Altenew and when I get it I'll doing something with the brighter flower. 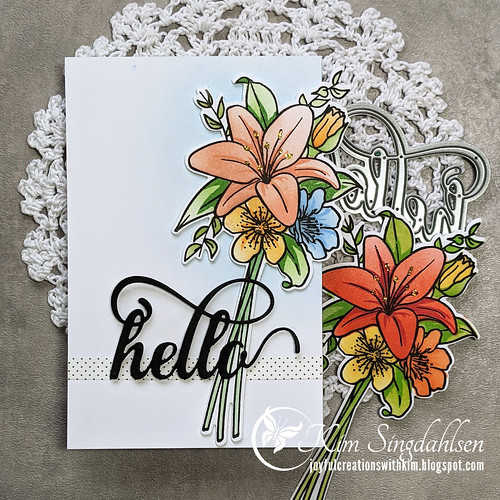 Other: Altenew washi, Yellow Stickles on the flower centers

FYI - The darker flowers the Altenew Rainbow Prism set long with what I hoped would be coordinating darker colors from other sets.  I used Ruby Red with Burnt Red accents, Warm Sunshine with Snapdragon accents, Orange Cream with Marigold accents, Parrot with Grass Field Accents

Posted by Kim S at 6:00 AM Labels: flowercard, hellocard, stencilcard
Email ThisBlogThis!Share to TwitterShare to FacebookShare to Pinterest