Freshly Made Sketches: You Can Do It

It's time for a new sketch at Freshly Made Sketches! Today we have a sketch by Cécile and here’s what I did with it! 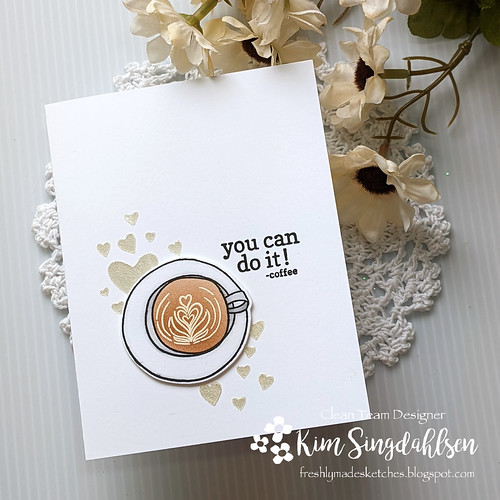 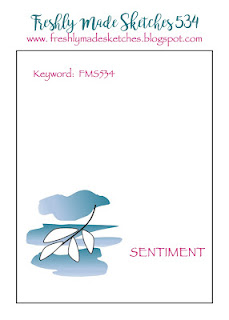 I love Cécile's creative sketches (and her stunning CAS cards) and I tend to be quite strict about using them - for instance, the sketch has a leaf on a watercolor-looking swoosh and I would tend to do exactly that because I love it so much. So I gave myself a little internal challenge to use the concept of a sketch but with my own spin. I took the sketch as something less regular behind an image/diecut. As I was flipping through my stash, I came up with the idea of a coffee cup and a mug mat. I played with that for awhile, but I didn't think the mug mat was true to the idea of a background "swoosh". Then it hit me that I could make patterned steam!!  I know that it probably didn't come out looking like steam - but that was the inspiration.

The coffee cup is from Ellen Hutson.  I stamped the cup image, then heat embossed the foam design in white. To do the coffee, I stamped on scratch paper, cut out the center and used it like a stencil to brush on the coffee color - then wiped it off the white "foam" design.  The stamp set with the coffee cup also has nice sentiments - but I had a specific need for this card and none of them fit so I used a sentiment from Reverse Confetti. The stencil is from Memory Box - I used bits and pieces of it. It took me three stencil sessions to use the pieces that I wanted then letting it dry before adding a different section. The paste is pearlescent that I picked because of my steam idea. 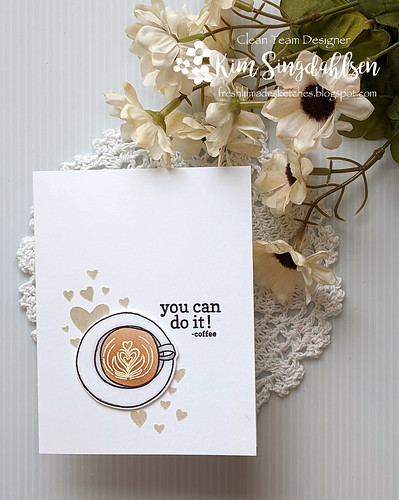 I hope to see you playing along with us this week at Freshly Made Sketches.  "You can do it!"

Stamps: Ellen Hutson Latte Love and die (the cup of coffee), Reverse Confetti For the Love of Latte (the sentiment)

Posted by Kim S at 6:00 AM Labels: encouragementcard, freshlymadesketches
Email ThisBlogThis!Share to TwitterShare to FacebookShare to Pinterest