It's day 2 of sneak peeks for the May release from Taylored Expressions!  Today I'm using a new set of sketched stars with a patriotic message - and a fire truck rushing to an emergency (a birthday emergency!)  It's definitely about "the brave" on my blog today!!  All the new products you see today will be available on Thursday, May 4th, 2017.  Be sure to check out each of the creative team members' blogs for all of the sneak peeks - starting with the Taylored Expressions blog.

I love patriotic messages.  I still shed some tears when patriotism is on display.  (Last night I was at my son's lacrosse game and the anthem was playing.  The track team was practicing off to the side and running sprints - they stopped dead in the middle of a sprint and immediately turned to the flag with their hands over their hearts.  I got weepy.   As a total sidetrack - I got even weepier at the end of the game when our team went to the middle of the field to pray - which is understandable given it's Lutheran High School.  And the other team, who aren't from a specifically Christian school, joined them!)

Back to the today's purpose - I truly do embrace patriotism.  I am thrilled that Taylored Expressions has continued their Stroke of Genius series with a set of stars and has also added to their Simply Said series with 4th of July sentiments. 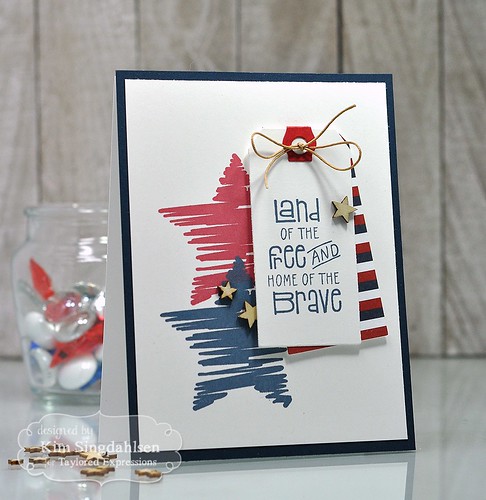 There are so many other stars in this set - I feel a little bad just showing you one of them.  Here's another peek at most of the set. 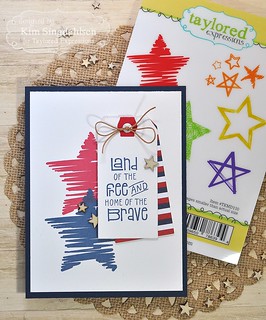 I send a number of patriotic cards over the year - not even just on patriotic occasions.  I have multiple acquaintances with children in the military - some in this country, some in the middle of action. I used to take a deep breath when a friend's child stayed in country and then a wonderful family at church lost their son in a helicopter crash right outside of San Diego.  I honor any and all in the military who are brave enough to fight for the land of the free.

Here's the supply list for this card and be sure to keep reading for a chance at prizes and for another sneak peek!

Before I share another product, I'm excited to tell you that Taylored Expressions is celebrating Release Week with some fabulous giveaways! Visit the TE Blog to answer Taylor's Question of the Day for a chance to win a prize from the latest release! 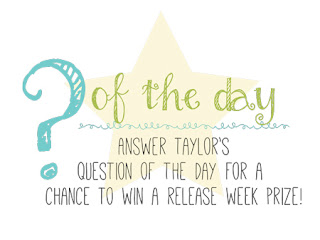 Firefighters are also at the top of the "bravery" list - although in the case of this card, they are being way more cute than brave!! 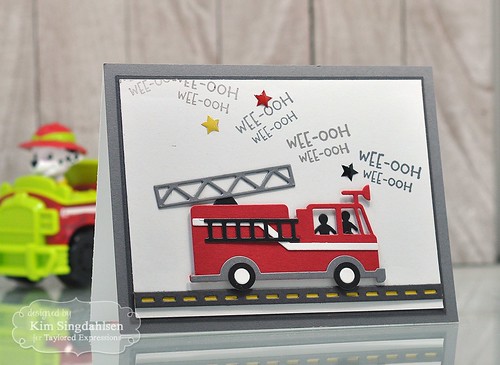 The new stamp set is called Wee-ooh Wee-ooh and has a variety of emergency sentiments.  The inside of this card says "Happy Birthday to the Little Chief"!  You can go an entirely different direction and says "Thanks for coming to my rescue".  (There are also stamps to coordinate with a new police car die set.)

The fire engine is a new die set called On the Road - Firetruck.  Look at the fabulous detail!  I have to tell you though that the little firemen are not in the die set.  They are from Potty People(!).  Not only are they from Potty People(!) but it's actually the baby(!!!)  It's the only one that fit inside the truck and when you can't see the little curled up baby legs, it could be a firefighter. 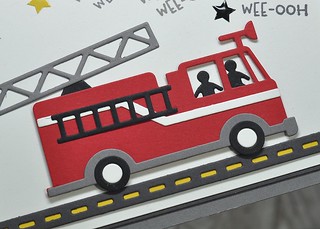 Tomorrow's cards are also definitely masculine - a little BBQ and a wonderful Christian sentiment for any men in your life. Be sure to head over to the TE Blog for links to the rest of the creative team and to enter the question of the day contest!


InLinkz.com
Posted by Kim S at 8:00 AM Labels: kidscard, patrioticcard, tayloredexpressions
Email ThisBlogThis!Share to TwitterShare to FacebookShare to Pinterest