Cheer UP with Casology

There is nothing new about this card - you've definitely seen it all before because I jumped on every trend out there.   Die cut letters on a shelf, baker's twine, scallops and even sequins!  The only thing that I didn't use, that I would have used had I owned what I thought I owned(!), is a wood veneer arrow for the up part.

I am playing along with this week's CASology Cue Card: Up.  I was a little worried about whether the sentiment was obvious, so I asked my fairly clueless husband and he didn't even hesitate before he said "cheer up...but it has too much bling" (that's his usual analysis of my cards - my clean, simple, basic cards!!)  I also added a little scallop to the "shelf" because I am always inspired by the challenges at Less Is More! 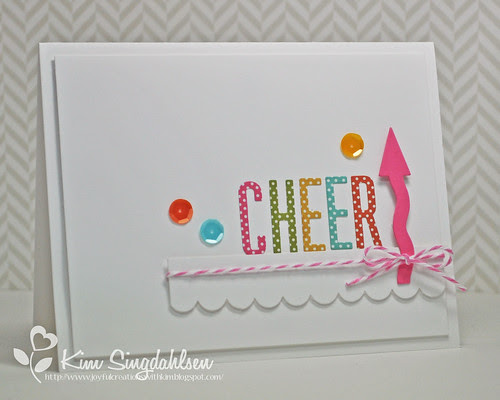 I really wasn't going to jump on the sequin trend.  I had myself totally talked out of it when I realized that the stores/brands carrying the really nice sequins had each color bagged separately.  I would have had to spend $60 and owned about 5,000 sequins to get a complete collection from any of these stores - because, you know, I have to have complete collections!  I do like some of the cards that I have been seeing, so I popped into Etsy and found some collections of iridescent, metallic and satin sequins at Endless Inkabilities - just enough in a bag so that I could play along with the trend!

iPad Users: The iPad/iPod tab at the top of my page has been updated.  Mostly just removing a lot of clutter - but it's MUCH easier to use!

An Amusing Google Reader Update:
Just a reminder that I defined the situation here (no, you won't lose your followers) and I gave a tutorial on Feedly here (my choice for a Google Reader replacement).

Feedly is now saying they have 3,000,000 new users.  Wow!  And the other service being used by cardmakers is bloglovin' - you can't read card blogs without seeing the button popping up.

It really makes me wonder what Google was thinking when they canned the Reader.  And I'm not the only one who thinks that.  Last week, Google announced a new note-taking tool called "Keep".  Tech bloggers and news people are warning against it.  One headline said "Google Keep just went live, and watching the media warn people about it is remarkable".  Other techie people have said it might even be better than what's already out there, but they say "fool me once, shame on you.  Fool me twice, shame on me" - they won't use it because they had been Google Reader users and no longer trust Google.

The big flaw that Google missed is that they not only annoyed a legion of crafts and cardmakers (!), they killed something that was used loyally by techies and journalists - the same people that they need to promote their products.  One techie blogger said, "It's a public relations nightmare that I'm sure is being discussed in a dimly lit office right now."

(This all has nothing to do with cardmaking and I'm sure none of you care - but I'm currently in a marketing class - and this whole move violates Marketing 101 - so I have been following in fascination!  Thanks for listening!)
Posted by Kim S at 7:09 AM Labels: encouragementcard
Email ThisBlogThis!Share to TwitterShare to FacebookShare to Pinterest