It's day 2 of sneak peeks for the June release from Taylored Expressions!!  The entire release is about summer fun and today I am holding a barbecue and enjoying some ice cream!  Be sure to check all of the other designers starting on the Taylored Expressions blog because there is just too much for one designer to show off in just a few days.
All the products that I have used are linked at the bottom, but remember that new products aren't live until Thursday, June 4th, 7 a.m. PST.

This month continues the "Eventful" theme starting last month.  Last month there were two border dies released - a tea party and a birthday party birder die - along with the "party" word die that you can see on my card below.  There were also two stamp sets - RSVP and Eventful - to create invitations (I used "BBQ" below).  This month there are dies for a barbecue, a cocktail party and a pool party! 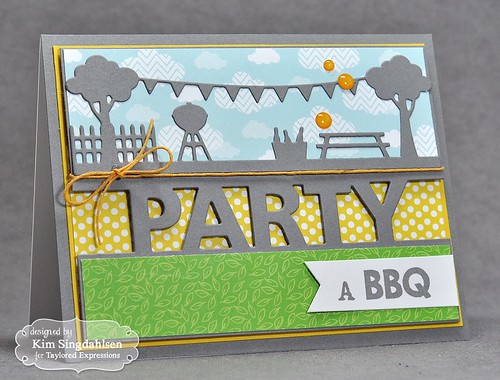 Isn't this picnic table just the perfect place to be?! 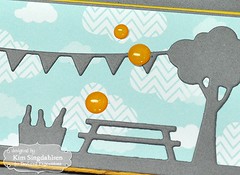 The patterned papers are from the previously released paper pack - Build a Scene.  I paired it with the new Earl Grey cardstock.  I started out with a black silhouette but it seemed a little "harsh".  I thought the gray gave it a more sun-washed look.  I've been doing that a lot lately - substituting gray for black.  TE has this mid-tone gray and also a deep gray called Poppy Seed.  They are both on the ice cream truck card at the end of this post.

Now for dessert!!  The new Summer Love Stamp & Die Combo brings us the ice cream!  I couldn't decide which of the images to use so I made two cards.  The first uses the ice cream cone and continues with the party theme. 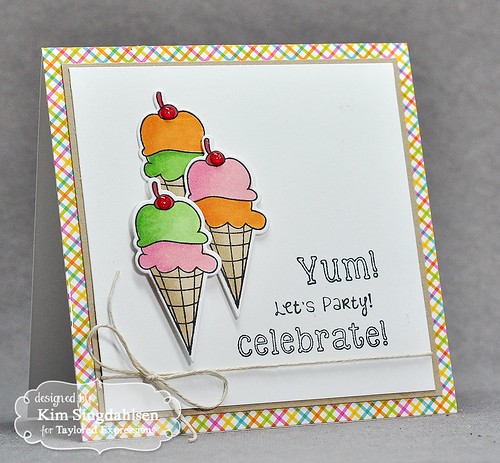 These ice cream cones look so yummy - I cut three of them, added a little plaid paper, and I have a simple party card. 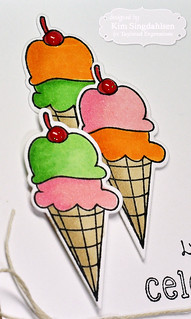 The set also has an absolutely charming ice cream truck.  I used papers from Carta Bella's Soak up the Sun 6x6 pad which drove the colors of this truck. 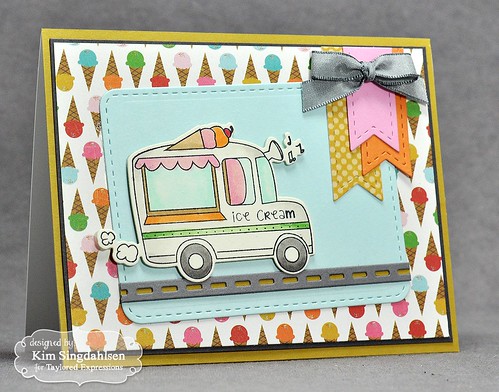 Seeing this ice cream truck brings back vivid memories of the music that could be heard for miles.  I remember stopping in my tracks, no matter what I was doing, running into the house to beg my parents for a quarter (yes, I'm that old!), then waiting on the curb for what seemed like forever for the truck to get to my street.  Even as an adult, that sound makes me smile!  (Although now my kids run to me and want $5.)

The road is done in Earl Grey cardstock.  The bit of dark border is Poppy Seed.  I love that it sets off the patterned paper but isn't as heavy as black. The previously released products on this card include the stitched rectangle and the banners from Pockets & Pages - Stitched Essentials, and the road is from Build a Scene - On the Road.


I hope to see you back tomorrow - there's a lot more summer fun with this release!  And don't forget to head to the TE Blog to leave a comment for a chance to win and to start checking out all of the other newly release items and design team cards.

Posted by Kim S at 8:00 AM Labels: tayloredexpressions
Email ThisBlogThis!Share to TwitterShare to FacebookShare to Pinterest