I've reached the conclusion that I won't be able to use all of my Christmas NBUS (Never-Before-Used-Schtuff).  That's OK because I really like playing along with the various Christmas challenges throughout the year, so I'll probably be making next year's Christmas cards starting right away in January...or maybe February!  I do have four more cards to do for this year (three after today!) and there are a few stamps that just have to be used right away. 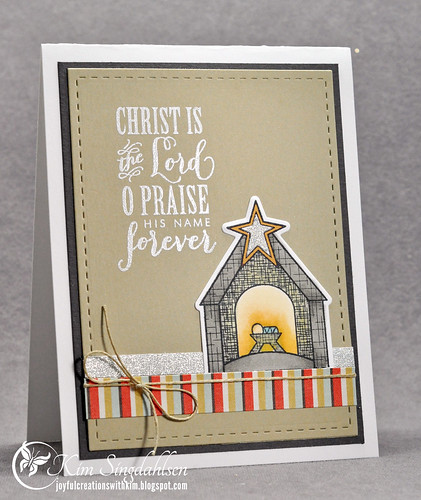 Funny story.  I've been complaining all week that I had broken my good camera and I was using a 15-year old point-and-shoot camera which had very limited options.  I know I offended some people who use point-and-shoots and I apologize.  It was much more that I am familiar with my dSLR and know how to set it for a good photo.  But I also learned my lesson last night when I was in a presentation by John Fielder, a very well-known nature photographer.  He showed pictures of himself pre-digital cameras with a massive backpack full of photography equipment as he hiked into the wilderness.  Then he started using a digital SLR, and now he estimates that 1/3 of the photos in his books are taken with a point-and-shoot!!  I'm fairly certain his point-and-shoot isn't a 15-year old camera purchased on sale at Walmart - but it still put me in my place!!  (In fact, I glanced at point-and-shoots when I was deciding what to do about my broken camera and learned that they can cost thousands of dollars - it's insane!)

It turns out that my camera just need a $65 adjustment, but my very nice lens went into the trash.  I replaced it with a fixed focal length 50 mm lens that doesn't even auto-focus, but it's going to be perfect for card photography!!  I think I'm going to love it - but I'm going to have to start from scratch in determining the best camera settings with this lens!

My other apology today goes out to my men/boys whom I called inept in a recent post when I was describing my dead Big Shot.  I asked them to try to fix it, but I held out little hope.  I was wrong.  They got the thing apart - I wish I would have taken a picture of the parts, pieces, nuts and bolts spread across the coffee table. And more importantly, they got it back together and it works beautifully!!

I'm off to a Christmas parade today!  It's supposed to be 60 degrees so not particularly Christmas-y, but my kids are in the marching band and they are thrilled with the weather.  Then I'm hoping to come home in the mood to actually address all of my Christmas cards - I LOVE making them...I really don't like getting them ready to mail - can you relate?  Although I have a head-start this year which really speaks to my obsessive-compulsive side.  I laid all of the Christmas cards out and snapped pictures with my phone.  Then I uploaded them to a folder in Google Drive.  I've spent the last week shuffling and reshuffling the photos and naming and renaming them with the recipient's name.  Some on my Christmas card list need Christian cards, kids need cute cards, some need elegant cards and some need humor - it takes time to shuffle them all!

SUPPLY LIST
The silver paper is from Michaels - it's a nice smooth glitter.  I've linked the Hemptique Natural Twine although I used a slightly darker color - more like kraft.  It's definitely not the Natural color because I have that too, but I can't find the darker color anywhere, so maybe retired?

Posted by Kim S at 9:06 AM Labels: christmascard
Email ThisBlogThis!Share to TwitterShare to FacebookShare to Pinterest