Nativity Border in Red and Blue

I love the Nativity Border Die from Taylored Expressions.  It's absolutely lovely and so perfect for cards that I make for church.  Then I recently stumbled on the Tiny Star background by Hero Arts (see comments in supply list) and thought the two would coordinate perfectly.

My first mental image was rustic yet elegant, so I went for a kraft and rich red color scheme. 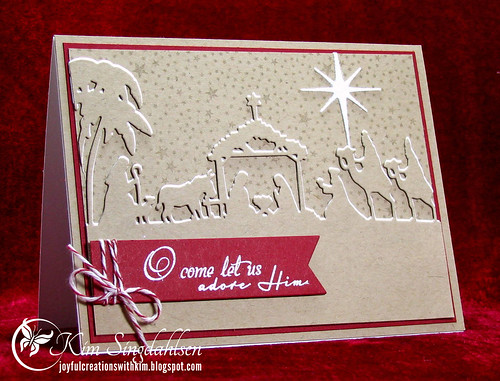 I added a white die-cut behind the kraft to set it off with the appearance of moon glow.  (It's not just a blurry photo!)

I love the red and it's absolutely my favorite of the two, but I also had the fairly obvious thought that I should try a true night sky.  So I pulled out navy and white for a more contemporary look to the scene. 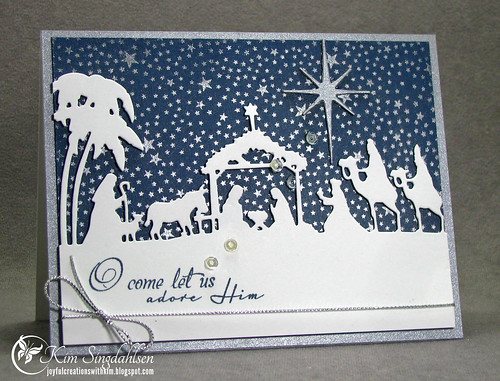 I did the stars on the blue card using Silver Pearl Ex powder which I haven't used in years.  I stamped the background with Versamark and then used a soft brush to cover it with the powder.  Finally, I used a stiff brush to remove the extra powder.  I like it for this card because it stays flat to the paper which then doesn't distract from the die cut.

You know how they say that troubles come in threes.  It's been a tough crafting week for me, full of expensive disasters.
What a week!  And go figure, it's all in December, when my money is budgeted for others.

The pictures above are with a 15-year old compact camera and I am surprisingly OK with them.  In fact, I didn't think they look bad at all until I compared them with earlier shots from my good camera (I had originally made the blue one with a different star and had photos of it.)  The pictures are above are decently clear, but they lack depth.  Nor can I manage a decent close-up shot.  I wanted to show you that the star on the red card is covered with glitter, but I can't get the shot with this camera.  The good camera goes to the shop on Monday - fingers crossed!!

SUPPLY LIST
FYI: The silver cord and the metallic papers are retired from Stampin' Up.  The star background is Hero Arts Tiny Star Background which I do not believe is in their current catalog, but I have linked where I found it.

InLinkz.com
Posted by Kim S at 7:16 AM Labels: christmascard, tayloredexpressions
Email ThisBlogThis!Share to TwitterShare to FacebookShare to Pinterest