There is a wonderful couple that I've known for years through our church.  Twelve years ago, Bill was diagnosed with cancer.  It was a very serious and widespread cancer.  Soon after his diagnosis, we held a huge 60th birthday party for him thinking that he would not be celebrating his 61st.  Ten years later, we did the same for his 70th birthday. Now a few years later, we are celebrating his and his wife Karen's 50th wedding anniversary.  Bill is still fighting hard and has been part of dozens of experiments and studies.  He does it so he can live but also to benefit others. Right now, he's in rehab unable to walk, but this comes after moments two weeks when he was not expected to last through the day.

Bill and Karen had big plans for their 50th, instead they celebrated in the rehab center with a small group of friends and family.  I was humbled to be part of a group of musicians that Karen brought in yesterday to surprise Bill at this celebration.  There are four of us who comprise a small praise team once a month at church.  All of us have known Bill and Karen (and for that matter their children and grandchildren) for a very long time, and Bill has loved our music.

With that background, you understand that their anniversary card needed to be above and beyond the usual. Not that that's what is important to them - but it was important to me to know that I gave them my heart with this card.  I've been pondering this for awhile - what could I do that was special?  I remembered some dies that WPlus9 came out with recently, and I remembered that Dawn's cards on the WPlus9 blog were absolutely "gasp-worthy".  I didn't venture far from the cards that Dawn did to introduce the dies - right down to her vellum layer which gives a beautiful dimensional look.  (There have also been a number of truly amazing cards on the blog since then.) 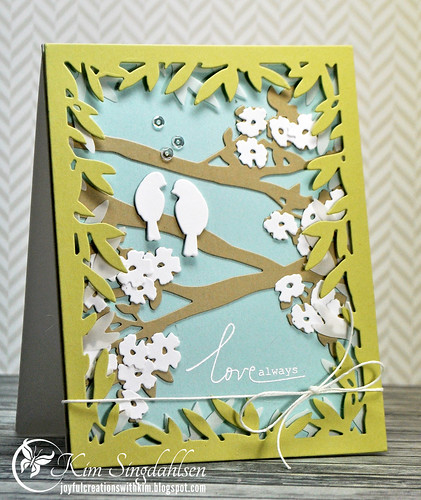 The card doesn't look particularly "clean" but I have to say that these dies made it quite "simple".  This beautiful scene is just a few die cuts; the only difficult part was adhering the layers on straight.
Posted by Kim S at 6:09 AM Labels: lovecard
Email ThisBlogThis!Share to TwitterShare to FacebookShare to Pinterest