This is not a card-related post, but I need to ask for all of your thoughts and prayers for the state of Colorado.  There isn't a day that goes by during which there isn't news of a new fire.  We currenly have 10 fires going on.  One has been burning for 2-3 weeks, it has burned almost 90,000 acres and is the most destructive fire in Colorado's history with around 200 homes burned.

Our church youth camp is near that fire.  In fact, the middle schoolers from our church were there and had to be evacuated.  Not in danger mode - but the firefighters needed the road into the camp as an emergency road.  Our campers were given less than an hour to pack and go.  The wonderful camp counselors made sure the campers were ready to go - but they, themselves, had to leave with nothing.  They still haven't been allowed to go back.

The fire that is prompting my plea is approaching a major city in Colorado - Colorado Springs with about a half million people.  The news is broadcasting 24/7 so we are watching it live as it gets nearer and nearer. They just showed a scene of a neighborhood on fire - you can literally see a wall of fire with faint outlines of homes in the middle of it all.  What we are seeing is almost unimaginable - but people are living it.  Right now, 32,000 people have been evacuated.  The major highway through the state is shut down in the town of Colorado Springs to give these people a way to get out.

I'm not near any of these fires - Colorado Springs is about 60 miles to the south of me.  I sit on a hill to the east of the Denver metro area and these particular fires are to the west.  I can see the smoke - I can regularly smell the smoke - my eyes are constantly burning.  I cannot imagine living closer. It's sad that I have learned how to "read" what I am seeing - white smoke is grass, small puffs of black smoke are trees, major boiling clouds of black are structures. 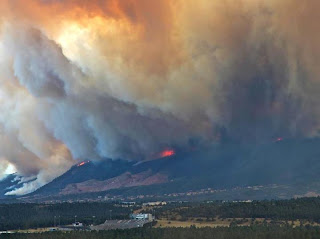 Posted by Kim S at 9:22 PM
Email ThisBlogThis!Share to TwitterShare to FacebookShare to Pinterest