My card is using the fabulous Stampin' Up Decorated Pine dies with inspiration from the colors at TGIF Challenges and the sketch at 52 Christmas Card Throwdown. 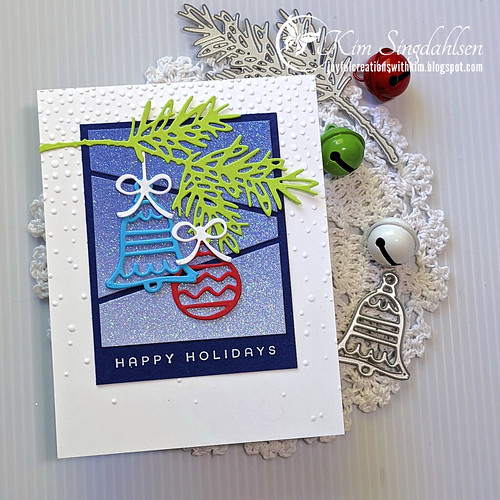 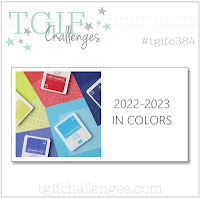 The idea of this card started with the sketch at 52 Christmas Card Throwdown. My original idea was a sparkly background and the angled lines were going to be silver cord with ornaments hung from it. Then as the card progressed, I realized I was using new Stampin' Up In Colors. At that point I hadn't used all of them because the ornaments were hanging from cord, not a pine branch (so no green) and I had only used Orchid Oasis (not the darker Starry Sky). But I remembered that the TGIF Challenge was to use them all and I realized that I wanted to try the challenge. It's a lot of colors for me all at once so was definitely a challenge.

The card and all of this post to this point was done before yesterday otherwise it wouldn't be done  at all because I'm typing this part with my left hand due to a broken right wrist. Just a fluke of a trip and fall at the office. It wasn't even that I tried to catch myself like they tell you not to do because you might break something; it was just where I tripped. Just bad luck. I won't see the specialist until next week after the swelling goes down but I'm hoping that my fingers will be free in the final cast they put on because I'm going to have to have to have something to do like cardmaking to relieve the boredom of recovering from the other part of the fall...the clumsy part...I broke my right ankle too.  I was literally walking from the printer to my office, rounded the corner, stepped wrong, and went down. I was even in flats, not heels. I so wish I could say it was something more glamorous like a daring mountain hike that went wrong...but no...I was printing a budget spreadsheet.  Anyway, the blog will be dark for a while. I'm hoping for a couple weeks, not a couple of months!

Posted by Kim S at 7:12 AM Labels: christmascard, stampinup
Email ThisBlogThis!Share to TwitterShare to FacebookShare to Pinterest