I have a 4-day weekend in front of me with virtually nothing planned.  I'm thrilled!!!  I've been at my craft desk all morning.  I did two cards that I needed to do, then I decided to sort my not-yet-used Christmas stash (mostly because I'm already seeing companies releasing Christmas stuff and I needed to be very familiar with what I already have before I bought more of the same!!)  So I was flipping through my Christmas stuff and see this ornament die by Penny Black - then remembered The Paper Players sketch challenge has a circle! 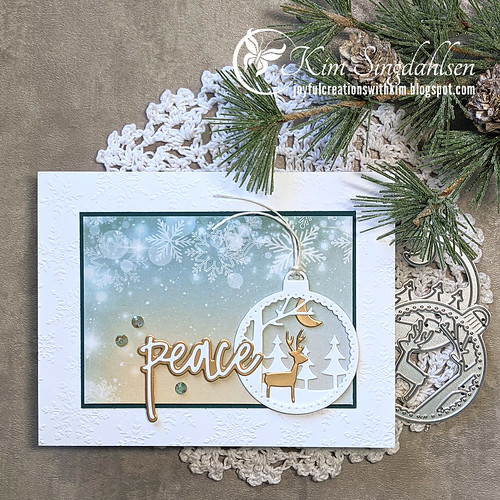 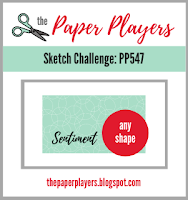 I knew I was starting with that ornament and then I went to the Christmas paper stash.  I love the Whimsy Stamps Blurry Flurries 6x6 paper pad that came out last year - and I loved it even more when I found a piece that would give me a golden glow at the bottom.  (FYI- this also drove the size of my card.  I was seeing the sketch as possibly a mini slimline card, but I needed the paper to be tall enough to show snowflakes and the golden glow so I went with a standard size to fit it all.)  The glow also led me to the golden paper - I initially just backed the 'peace' with gold, but then realized I wanted the deer to pop so carried the gold through to the ornament. I wish I had some gold twine instead of the white that I 'hung' it with.  We moved three years ago and the only thing lost in the move was my small box of twines (who remembers the silver, gold, and copper twines from Stampin' Up??!)  I'm still bitter about it - and I still haven't found anything that compares.
A big thank you to The Paper Players for the inspiration!
SUPPLY LIST
Dies: Penny Black Moonlit, Memory Box Peace Jotted Script
Paper: Whimsy Stamps Blurry Flurries, Tonic Studios Honey Gold Satin Effect, Stampin' Up Pretty Peacock
Other: Stampin' Up Winter Snow Embossing Folder, Pretty Pink Posh Sea Glass gems
Posted by Kim S at 12:13 PM Labels: christmascard
Email ThisBlogThis!Share to TwitterShare to FacebookShare to Pinterest