Taylored Expressions If Balloons Could Talk

Taylored Expressions has a fun new feature for which they ask one of their staff members to select products for each of the design team members to use.  The full post is here on the TE blog.

Meredith is our first featured staffer.  She is the TE shipping manager and also the busy mom of four - three of whom are 7-year old triplets!! She owns the Block Party - Party die and wanted ideas for an upcoming birthday.  The idea needs to be gender neutral and easy for Meredith to replicate.  Here's my idea for Meredith. 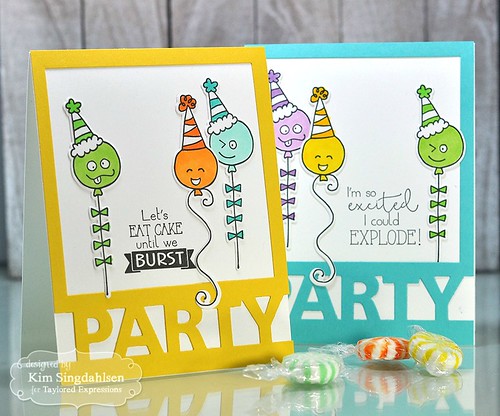 There is a lot of detail on these cards but still very easy to replicate.

Die cut images can help make multiple cards in two ways.  First, Meredith can stamp all the images and then carry around a bag of images and Copics (or any other coloring method) so she can color whenever she has a free second.  I also kept each balloon monochromatic so she doesn't need many markers - although she could also choose to use a rainbow of colors for each balloon. And second, if she doesn't like one of her balloons, she can just color another balloon instead of having to create an entire new card front.  (Personally, I make lots of mistakes so I like not having to start from scratch.)

I also thought that it would be fun for the kids (and easier on Meredith) if she had them color their own balloons.  Then perhaps instead of a sentiment on the card front, she could write "art by ____" or "balloons by _____" and then credit the kids.

The card front is also quite easy.  Using colored cardstock, I cut the square using Stitched Square Stacklets, then I cut the "party".  Then simply adhere to a Sugar Cube card base to provide a frame for the balloons.

I then thought coordinating thank you cards might be nice.  I added a polka-dot "thanks" and one little balloon for these quick and easy cards. 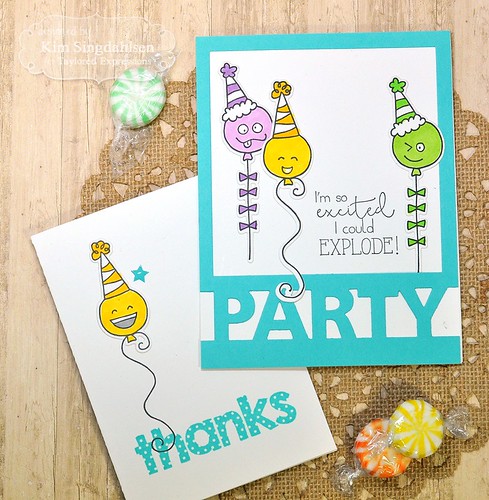 FYI - if you look closely, the balloon head is die cut on the thanks card.  I wanted to stamp the image directly on the card so that the string could intertwine with the sentiment but since I used Copics, they tend to bleed through.  I stamped the balloon heads on separate cardstock to avoid seeing it on the inside.  I'd recommend to Meredith to not use Copics on this card!

Here's the link to this card on the TE blog, but more importantly, if you click back through the three previous posts - you'll see what the rest of the design team came up with for Meredith.

Hope it's a great party Meredith!! 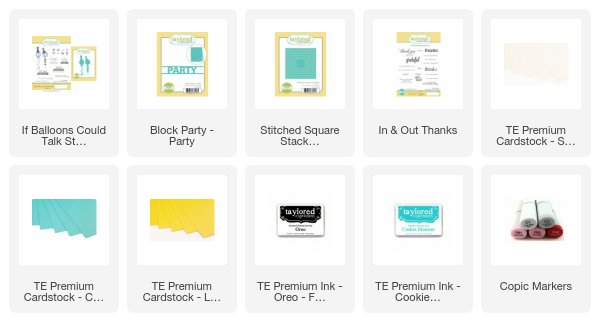 Posted by Kim S at 6:00 AM Labels: birthdaycard, kidscard, tayloredexpressions
Email ThisBlogThis!Share to TwitterShare to FacebookShare to Pinterest