Sympathy in Gray and Yellow

I had to make three sympathy cards this week.  There are a lot of sympathy cards on my blog, but virtually all of them were made for my church.  While I tried to make each and every one of them special, I did not have any emotion invested in them.  It's so much harder when you know the people involved.

I love the Fog cardstock from Simon Says Stamp.  I use it on all kinds of cards - I've even been using it as a base for rich fall-colored cards and bright, cheerful birthday cards.  I love the way it sets off the colors.  For this card, I happened to have my package of Fog out and my package of Stampin' Up So Saffron and I loved the soft and gentle look.  To stay with the idea of gentleness, I pulled out this beautiful feather from Clearly Besotted Stamps. 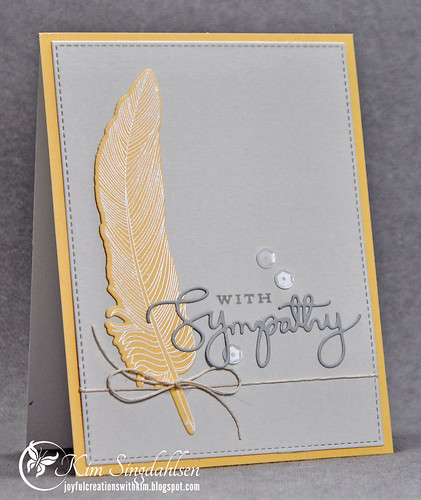 Just a month or so ago, I was looking through my word dies and realized that I had nothing that said "Thinking of You" or "Sympathy".  I remedied that situation immediately.  I love how a sentiment is highlighted when it can be layered on top of other parts of the card such as the feather. 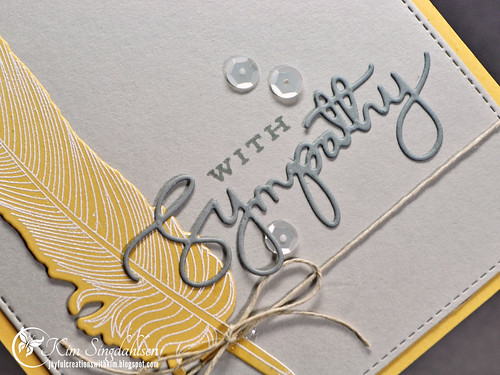 My second sympathy card is for the family of a man that I wrote about on this recent post when he and his wife were celebrating their 50th wedding anniversary.  After fighting cancer for over a decade, it seemed clear at their anniversary party that he was starting to lose the battle, but he still lived life.  Only a month ago, he got himself to church (which was not an easy task) just to see the small praise group that had played at his party. It meant the world to us to see him there and, hopefully, we touched him with our music.

This particular card is for his daughter and her family.  The grandchildren are my children's ages and they have grown up in the church together.  I stuck with a gray/yellow color scheme.  I used the flower from Clearly Besotted's Brushed Poppies which I purchased knowing that it would be quite perfect for sympathy cards. 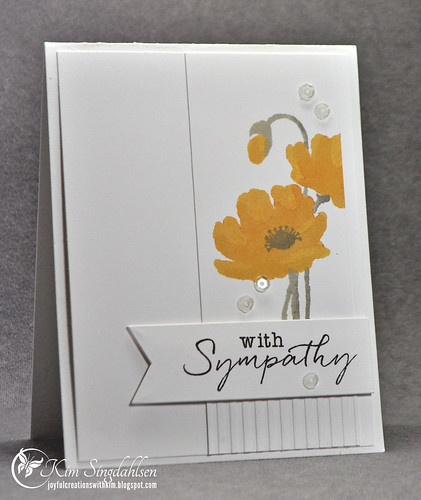 I used the sketch at Pals Paper Arts but I flipped it vertically.  I had started with a one-layer card with the flower in the bottom corner. This flower is gorgeous on its own, but I liked the idea of just a little texture or pattern below the sentiment. 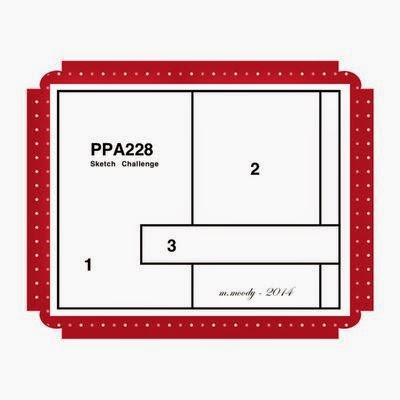 My final card is for the husband of a friend who lost her battle to cancer two years ago.  We are far away and I have not seen him since her death, but I always want to let him know that I remember.  This card most definitely had to be clean, masculine and no bling.  Jeff is a firefighter, he helps with his father's cattle, and he lives on a tiny square of private property in the middle of the Black Hills National Forest where he rock climbs and rides his quad. 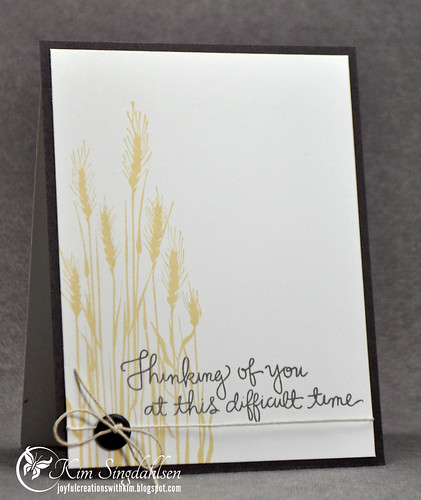 WITH SYMPATHY - The wheat stamp is Hero Arts Tall Wheat which I could only find on EBay.

Posted by Kim S at 6:01 AM Labels: sympathycard
Email ThisBlogThis!Share to TwitterShare to FacebookShare to Pinterest