Taylored Expressions has started the cutest new series of dies - the Roly Polys.  I previously used Roly Poly - Penguin on this card, but there are three others that I hadn't played with yet.

I happened to wander into The Container Store on the day they were putting out their Christmas wrap and found this chalkboard gift wrap. The same day I was in Stein Mart and found this wine glass.  I am definitely not a "shopper" so when these things came together without my even trying - I knew it was meant to be.

I grabbed a bottle of wine (which by the way I picked by whether its label matched my gift set - sad, huh?!) and I started die-cutting Santa! 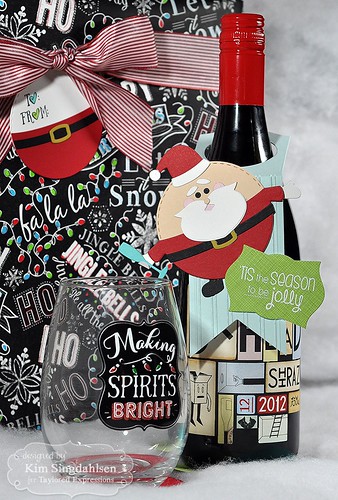 I created my Santa and added him to the Bottled Up die cut which I embossed with Bead Board just to add some texture. The tag is another die in the Bottled Up set and I was thrilled that the "jolly" sentiment fit inside perfectly!  I plopped a glass in his hand,which fit with his rosy cheeks and raised eyebrows - and it's a fun gift set!

I hope nobody is offended because Santa is definitely a little "jolly" already!  Check out how close he is to spilling his glass. 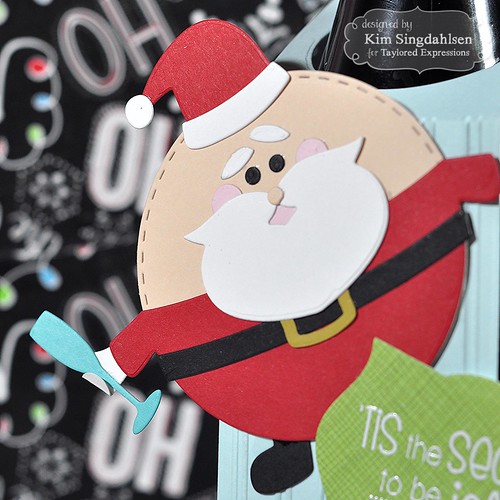 I didn't want to make exactly the same thing for the package so I cut a circle in white, added his pants (by cutting off the sleeves!), then stamped the to/from.  I did have to stamp the "to" separately from the "from" since the full stamp with both of them is lined up a little differently so they don't fit into the circle. 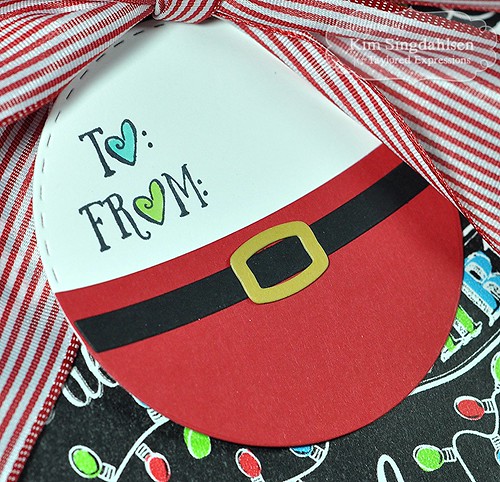 This was fun!  Over the years, I have avoided projects other than cards, but I'm starting to view it all a little differently.  I'm looking forward to using this set and have just the right friends in mine who will smile broadly at jolly Santa and then open the bottle!!  (And I'm sure they'll share with me!)

I also used a scrap of flesh-colored cardstock for Santa's face.

I need to tell you that my patterned green paper came from Build a Scene- Halloween which is a little odd, but it works!  I actually had it in the wrong paper pack or I probably wouldn't have used it because it looks so wrong in this supply list!  TE has plenty of other paper packs with bright green patterns that would work perfectly.

InLinkz.com
Posted by Kim S at 6:00 AM Labels: christmascard, gifts, tayloredexpressions
Email ThisBlogThis!Share to TwitterShare to FacebookShare to Pinterest