I know you are probably all done with thinking about Christmas so I really shouldn't be posting a Christmas card today.  But it's my day to post at Fresh Squeezed Stamps and since they came to my rescue on the 24th, I wanted to share.  We had planned to give my 13-year old son his pick of basketball shoes for Christmas.  This is somewhat different from our usual approach in which he wants the most expensive and we refuse to buy anything but the cheapest!!  His gift was to pick out his own (within reason) without us complaining about the price!  As I was finishing up on Christmas Eve it occurred to me that he wouldn't have anything from us under the tree because he had would have to go shopping for his own shoes after Christmas.  He's still so young - I HAD to have something for him to open up.  Fresh Squeezed and their cute tennis shoe from String Me Along came to the rescue!! 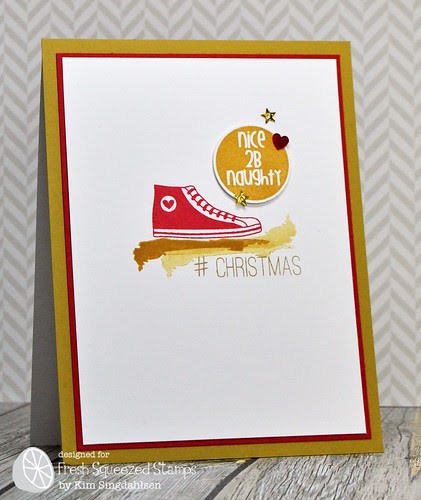 If you knew my 13-year old son, you would understand why I also HAD to include the "nice 2b naughty" graphic from Hello December!  (BTW - if you like the idea but not for Christmas, On Trend 2013 has a great birthday word bubble that could replace the "naughty" circle!  That set is also where I got the swoosh that I used for the ground.)

I hope you all had a very Merry Christmas and are now looking forward to the new year!!
Posted by Kim S at 4:00 AM Labels: christmascard
Email ThisBlogThis!Share to TwitterShare to FacebookShare to Pinterest